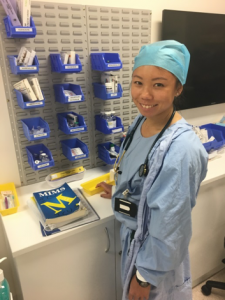 “Gosford was my first choice as a placement after I finished university. I grew up in Sydney and studied medicine at Newcastle University so I knew a number of the senior team at CCLHD through the partnership with the Uni. I think for me one of the biggest benefits for me in coming to the Coast was the huge amount of support from the Resident Medical Officer Association. I arrived into a community of my peers who had stood exactly where I was currently standing and became like a family to me. You can’t avoid meeting and befriending you colleagues with the number of social opportunities that you are presented with from trivia nights to wine tours, movie nights and the infamous end of term parties.

I don’t think I fully understood the effort that was put into organising ways to make me feel included and welcomed until I was in my second year and responsible for doing the very same thing for the next group coming in.

I remember preparing for orientation week and just about to open the doors for the next group of interns to flood through and my eyes filled with tears. I think when I arrived I enjoyed the experience and was instantly a part of something pretty special but for me the responsibility and opportunity for me to pay that forward and be able to facilitate that same experience for others was one of the stand-out moments from my experience working here.“